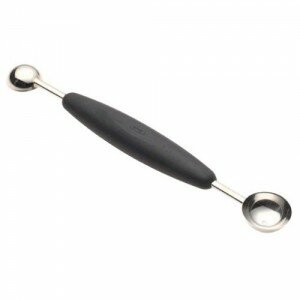 I was reading an article in the Food & Wine magazine that stated most chefs you ask find the melon baller to be one of the usless cooking gadgets they have in their kitchens and that you’re likely to hear more than a few unkind words about the humble melon baller. Ok, so maybe it’s not so versatile as a chef’s knife. But I’d like to give recognition to what I agree to and love the melon baller for.

Personally, I don’t think I have a kitchen gadget in my kitchen that I find useless. I’m always learning a new trick or two on ways to use my kitchen tools and gadgets.

How about you? Do you have a kitchen gadget you find you don’t use as often as you’d like? If so, what are they?